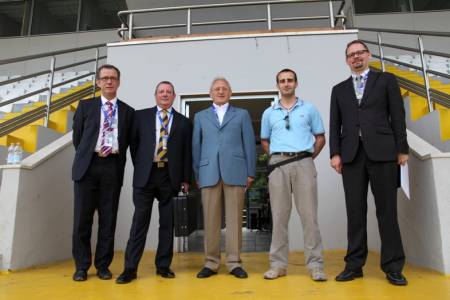 GIUDICI:
Gary George, UK
In 1972 Gary was offered the opportunity to learn to play a brass instrument and join the school Brass Band. This he did with gusto, not because of his love for music but because he had already noticed that other pupils had been missing English class when the peripatetic music teacher was in school. Gary took to the Baritone like a duck to water and was soon spending all of his spare time playing with local Brass bands and the North West Area Youth Band in Manchester.
At the age of 16 Gary enlisted as a Junior Musician in the Kings Division Junior School of Music at York where he trained for two years before being posted to the Regimental Band of the Kings Regiment as Solo Euphonium. Soon after Gary attended a year long pupils course at the Royal military School of Music Kneller Hall. On returning to his Band, who where by then posted to Germany, Gary soon had his trade qualification exams under his belt and was on the road to a vast musical career.
In 1985 the Band returned to Chester and whilst still working as a professional musician Gary managed to study Bach for three years, play and conduct within the Championship section of the Brass Band world and manage to score numerous arrangements for the Brass and Wind Band.
His Band was then posted to Berlin were there was not a lot to do as a musical hobby but he did manage to take the local Grunenwald Kappeller (which was best described as strange).
On his return to London for a two year period of Public and Ceremonial Duties, Gary was raring to get a touch more music back into his life. He took on the position of Musical Director for a charity organisation that put out live performances of Sunday Night at the London Palladium (at the London Palladium), Played for the Hendon Band under the baton of the great Philip Sparke and also found the time to conduct Adisham town and the Hasemere Band.
In 1994 Gary was picked to go to Kneller Hall as an Instructor teaching Practical, Aural perception, Harmony and Instrumentation, this he did for three years while still managing to keep his outside interests ongoing.
Gary was then posted to The Royal Tank Regiment Cambrai Band in Germany were he spent an exciting four years giving musical support to the whole of continental Europe. In 2000 Gary left the Army and became a music teacher at a school in Kent In 2002 Gary reenlisted into the Army and now has the post of Warrant Officer Class Two to the Band of the Princess of Wales’s Royal Regiment which is a Territorial Band based in Canterbury Kent.
Gary Still has many ongoing musical interests including Arranging and Composition, Rock/Soul Band, Jazz, Local orchestras, and at present as a Judge for WAMSB.
Gary has been awarded the Commander in Chiefs Certificate for Meritorious Service in the 2010 New Year’s Honours List.

Henk Smit, NL
Henk Smit started playing percussion in marching- and showbands at the age of 12. Later on he became percussionplayer in several local windbands in the the Netherlands. At the age of 15 he became member of one of the leading youthwindbands in the Netherlands, the Ducht National Youth Orchestra.
From 1980 till 1987 he studied percussion at the Conservatory in Groningen, the Netherlands and became conductor / instructor of several percussion and marchingbands. Later he started conducting of windbands. Henk also studied conducting at the conservatory of Rotterdam.
After his studie, Henk started as percussonteacher at the musicschool ‘De Wâldsang’ in Buitenpost and ‘Westerkwartier’ in Leek. At this time he was, as percussion teacher, conductor of the percussion ensemble of the musicschool. With his percussionensembles he had lots of successes: First Prize winner at the National Ensemble Competition of the Dutch Bank of Communities, first prize winner at het ensemble competition of WMC in Kerkrade and several radio and national television programms.
Also with his marchingbands and – later – with his windbands he scorede many successes at National Competitions. Several National Championships in marching and concert are on the competition award list.
From 1991 till 2005 he was conductor of the Dutch National Percussion Ensemble.
In 1991 he started working as National Advisor at the National Institute for Music in Utrecht, now calle ‘Kunstfactor’.
Henk is also a well know composer for percussion-ensembles. In 1997 he composed the testpiece for percussionensembles for WMC Kerkrade.
In 1986 he started as adjudicator for the Dutch National Music Organisations. He judged several regional and national competitions. He also is since 1993 International judge for marching- and showcompetitions. He judge the National Championships of Italy and Denmark several times, is judging a lot in Germany and judged as WAMSB adjudicator in England, Italy, Japan, Korea, Brasil. Since 2005 he is also judging for the South African Fieldband Organisation. In 1997 he was member of the juryteam World Music Contest in Kerkrade. In 2001, 2005,2009 he was chairman of the judgeteam for WMC Kerkrade for the Marching, Marchingparade, Show and concert competitions. Henk is also boardmember of the Dutch organisation for wind band conductors.

Karsten Mellon, DK
As an experienced judge, Karsten Mellon has judged at the World Championship in Brazil, World Music Contest (WMC) Kerkrade in Holland, as well as in Spain, Italy, Germany, Belgium and Malaysia. Karsten is presently the primary conductor for the Association of Danish Marching Show Bands and their National Conducting Course lecture.
Karsten has held the position of musician in the “The Drum and Pipe Band of the Royal Danish Life Guards”. He has been the director of Danish music schools and a member of the National Danish Music Council Committee. He has also been musical director and conductor of the oldest marching Show Band in Denmark for nearly 15 years.
He has worked professionally for a number of years with marching showbands and bigbands, and is very experienced in teaching, developing and judging music and show. He also composes and arranges music. His early experience goes back to when he started as a 10 year old boy in a marching show band, and became drum major, musician and conductor.
Karsten studied music at the Central Coast Conservatorium in Australia and the University College in Denmark. He holds degrees from Roskilde University and University of Southern Denmark, and besides working as musician (trumpet) and conductor he holds a position as assistant professor at University College Sealand, Denmark.